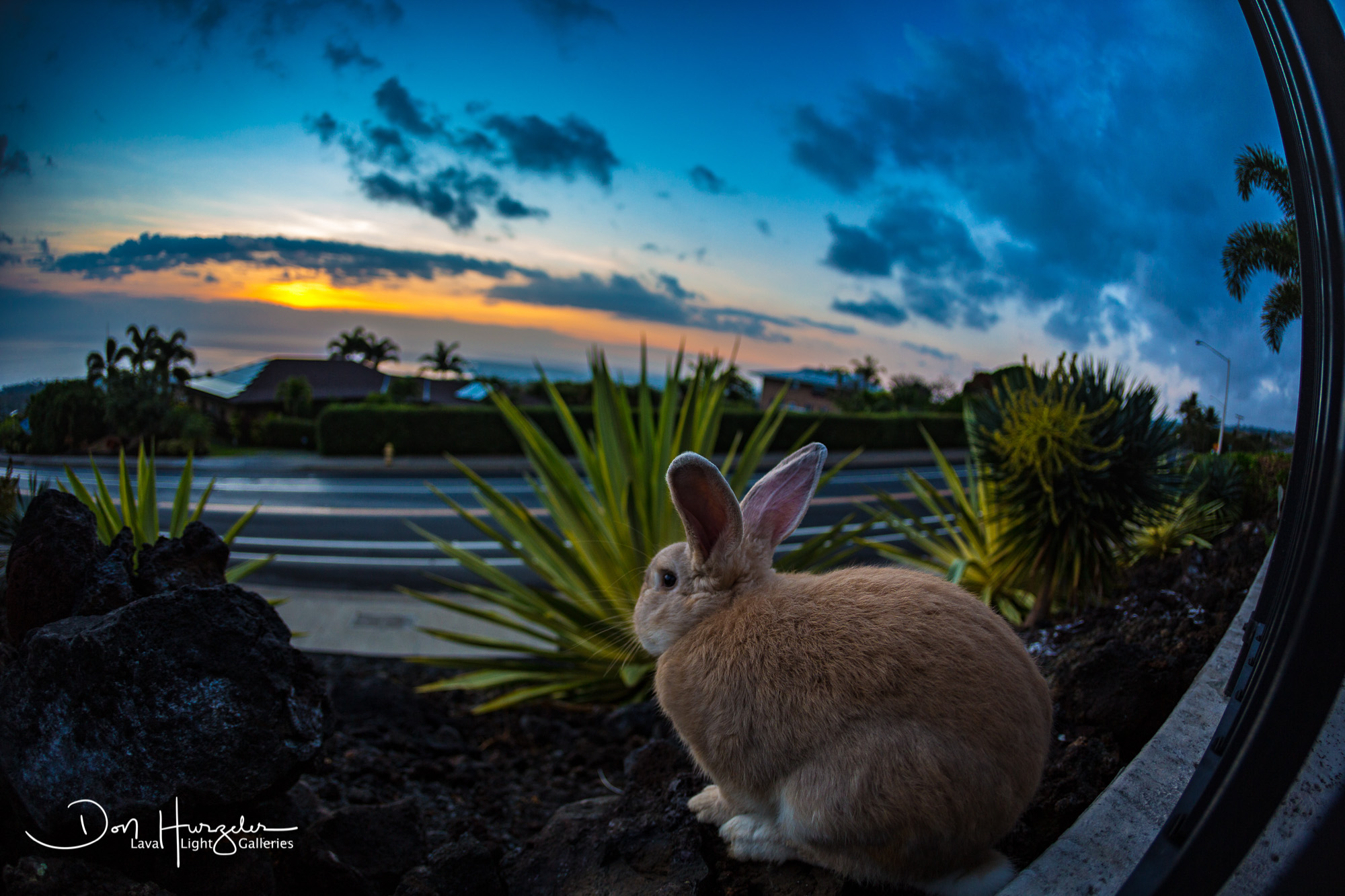 Linda and I came home late one night here on the Big Island. In our driveway, hoping around, a great big rabbit. I don’t drink and my wife had only had a single glass of wine…but there it was…a fairly giant rabbit. Linda got out of the car, walked right over to it and gave it a bit of a back rub. I parked the car and came back to get in on the fun…and the big guy let me pet him as well. That was about five years ago…

Turns out, Bun Rabbit (aka Benjamin Rabbit, Mr. Rabbit and several other names…all given him by neighbors) liked out neighborhood and would stick around from then on. He must have been someones pet at one time…we tried locating his owner with out any luck. So, he became a free range pet that everyone in the neighborhood could enjoy. He had been neutered…was pretty old for a rabbit and there were no other rabbits around. He was a threat to no one nor any other species. He did plow through neighbors gardens…but we all put up with it. All visitors got to play with him. All local dogs got to chase him…with absolutely no success. He delighted kids and adults. Bun Rabbit was a star.

The Department of Land and Natural Resources (the DLNR) would hear about Bun from time to time and send a guy over from Hilo to trap him (because he was a non-native and invasive species). That never went well for the trapper. Bun was a survivor and quite a bit smarter than the guy from the DLNR. They finally gave up after we called them and told them he was old and neutered and a threat to no one or no thing.

Happily for us, Bun liked our place. I would like to think it was because we were such good friends to him. Truth is…we have no dogs. So…he often lived on our property. Sometimes he lived below the kitchen window, other times behind a big rock near the driveway….in recent years he wanted to be even closer…on our lanai or next to it…or my favorite place, right outside our office door hidden away in the bushes…where we could see him and he could see us. He would sleep there all day and go hang out with his hoodlum bird friends in the evenings and early morning hours. Often times I would peak into the bushes to see if he had come home from his night time feeding adventures…and there he would be with two or three of his erkle francolin (a good sized bird) buddies sleeping up against his body.

Sunrise and sunset were our times together. He would come hoping in from goodness knows where and just silently show up right next to me. Other times, he would see me from a neighbors yard and come hoping across the yard and leap our rock fence in one nifty movement…stopping right by my feet. Sometimes it would be Linda who was with him…more often it was me. He was always happy to see either one of us. We put food out for him…which he always ate on top of whatever else he had eaten that night. He rarely wanted any water…had his own source on the leaves and rocks. After he ate, we would give him a back rub and then wonder out to the point on our property nearest the ocean. In the daytime, it held little interest for him. In the evening he would often sit out there with me watching the sunset…and as soon as the sun disappeared…so did he. The photo on this blog is from one of those many nights.

Bun was the healthiest animal I have ever encountered. He kept himself in great shape…always well groomed…never got too fat nor too skinny. He got sick exactly once. One vet here told us he was a goner for sure and not to bother to bring him in. Another said there might be one medicine that could work. With the help of our good neighbor, Harley, we gathered him up and took him in…and force fed him medicine for about ten days. I’ll be darned…it worked and he returned to his formally happy life. That was two years ago…borrowed time for sure.

Time ran out this morning. He did not look very energetic last night. For some reason I got up at 4am to check on him. He was on his last legs. I’m no vet…but he looked like he was dying of natural causes…age related. Linda came out and we quietly petted him until he fell asleep. He passed shortly after the sun came up. I am guessing he was about eight years old…old for a rabbit. A neighbor reminded me he had a pretty terrific life and lived a long time here in paradise. Still hurts.

Services were private…he didn’t want to make a fuss.

In case you couldn’t tell…I love that guy. Bun Rabbit…thanks for hoping in to our lives and for sticking around as long as you could. Aloha and a hui hou.