You ever read about the dumb tourists that get too close to a wild animal and get hurt…like too close to a buffalo or a bear?  I read the articles and watch the YouTube videos and just shake my heads at the idiots involved in those dangerous encounters.  And now…one of those encounters starred Linda and myself.  Here is how easy that kind of situation can develop.

Linda and I shot Old Faithful in Yellowstone, at night, hoping to get the Milky Way above the eruption (mixed results).  After the sun came up, we headed back to our hotel in West Yellowstone to get some sleep.  About a mile or two from Old Faithful, in an area called Biscuit Basin, Linda spotted a bear on the other side of the Firehole River…two bears.  I circled the car around and we grabbed our cameras with the big lenses.  There was about 100 yards of meadow, then 25 yards of river and the bears were on the other side.  Safe enough conditions to be out in the open with bears around….but wait!

I took the lead and ran across the meadow.  As I approached the river bank, I could no longer see either of the bears.  One of the two bears I never saw again…don’t know where he went.  What I did see was six tourists to my left running for their lives.  That got my attention.  I turned my gaze toward the river and there…right in front of me…coming up the bank on my side of the river…was the largest grizzly bear I have ever seen.  He was maybe 25 yards in front of me and moving toward me…with Linda not far behind me.

I alerted Linda.  The bear took notice of the running tourists.  He then took time to shake off the water from the river, find a tree, scratch his back on the tree and began eating the grass and flowers that had brought him to this side of the river for a meal.  Linda and I quietly walked backwards, taking dozens of photographs as we retreated and finally made it back to the safety of our car without incident.  At all times, we both knew that he could be on us in two seconds if he so chose to do so.  I have never felt so stupid or exposed.

By now, numbers of other cars arrived to watch the bear and see if he would eat us.  The occupants seemed disappointed that we made it back to safety.  Together, we all watched the bear eat and enjoy the beautiful morning for more than a half an hour…hundreds of photos were taken and no one badgered the bear nor endangered themselves by getting too close…we all stayed in or right next to our cars.

One other dangerous situation presented itself.  Three guys on bikes came by and did not seem to notice the bear nearby.  Just as they got even with the bear, some impatient driver honked his horn and startled the bear.  The bear took off at full speed (which is quite impressive) on a line that would take him right to the bikers on the road.  Happy to say that he passed right behind the bikers without stopping and made it across the road to safety and the brush on the other side.

I kind of know what I am doing when I am in the water with sharks or other large critters.  However, I have very little experience being in the wild with bears or other large animals like you might find in Yellowstone or elsewhere.  We saw bears all over Yellowstone and well outside the park, as well.  As large as they are, they can just pop up and then you need to be prepared to deal with them.  We had bear spray with us…which seemed SO inadequate and dicey.  It does give you nine seconds of spray to slow the bear and really piss him off before he eats you.

As for those who go hiking alone in back country…you are braver than me…by far.  I have now had two or three scary encounters with bears and that is enough.  I’m sticking close to the car when they are around. 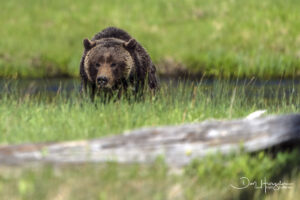 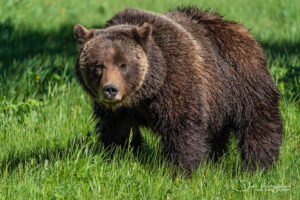 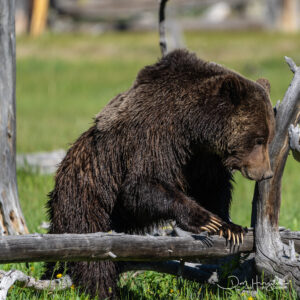 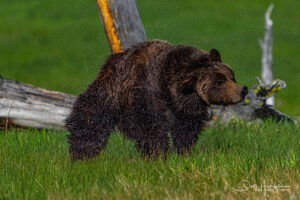 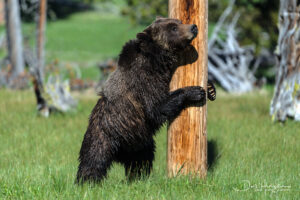 Things are returning toward normal on the Big Island and at our gallery.  Most businesses have re-opened.  The hours of operation are returning to near normal…right now we are open 10 am to 8 pm seven days a week…earlier or later on occasion or by appointment.  Rental cars are still scarce…so book early.  Boat trips…such as dolphin excursions and manta dives…are booking up, so again…book early.  Masks are still required indoors.  Covid rates of infection are quite low, but we still see a few new infections on the island each day.  Not sure how many of the residence on the island have been vaccinated, but I believe it is over 60%.

CJ, Linda and I just travelled off island and back…and it was simple and the covid process was quick.  However…that is for returning residence.  Check the protocols for visitors. I believe that tests are still required and that the process is still kind of aggravating…but officials have gotten better at the process and it should work ok for you in your travels.

Island conditions are near perfect.  We had an eruption going, but it has gone quiet for the time being…we miss seeing the lava glow, but are enjoying the blue skies.  A number of minor earthquakes centered near the National Park…makes us think there will be more lava activity ahead.  The ocean is clear, warm and the surf is small for the summer.  It is a great time to be on the Big Island.