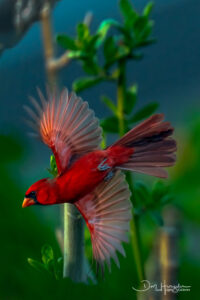 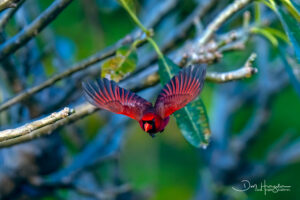 Got to admit, I am pretty proud of these two shots…colorful, clear, stop action on a fast moving bird in low light.  If I had a third arm, I would use it to pat myself on the back for these two shots…I love them.

So there are a couple of lessons here.  First, I could never have gotten either shot without the proper tools…a great camera body (Sony a1) and a great lens that is both telephoto and gathers lots of light (Sony GM 400mm 2.8).  Admittedly, these are expensive tools, but much needed if you take photos for a living, as we do.

Second, neither shot just happened.  I got the birds used to having me around.  I showed up at the same time each day with some peanuts or sunflower seeds for them to enjoy.  I watched their flight paths so I could pick a spot where I knew they would eventually cross.  I tried all kinds of speeds and settings to get the shot I wanted.  I settled on 1/4000th of a second, at f2.8 to 4.0 depending on the fading light (f4.0 is much better and gives more depth of field) and an ISO of 400 to 640…although the horizontal one was taken at 1600 ISO…as the sun had about set and I thought I might give it a shot (I hate high ISO but this one worked out well).  So, the shots did not just happen because I got lucky…I planned my luck.

And here is the part we do not normally mention…I probably shot 10,000 cardinal shots over the last two months to get these two shots.  Got some nice shots…and two great shots.  Also got thousands of misses, which we call “deleters”.

So, if you are seeking that great shot of whatever the subject, come prepared with good tools, observe the situation and put together a game plan, make adjustments as needed and wear out the shutter until you get the shot that will cause you to grow your own third arm.