Our Lava Light Gallery at the Queens MarketPlace, Waikoloa is open seven days a week now…from 11 am until 7 pm and earlier or later by appointment.  We are doing quite well, even with limited tourist traffic on the island…and we are all healthy.  Come see us if you are “on island” anytime soon.

The eruption of Kilauea continues.  The lava lake is huge…nearly 700 feet deep and covering some 80 acres.  The actual lava is not visible from any place safe or legal…but the beautiful glow of the lava after dark shows up nicely from all the regular locations.  The Jagger Overlook remains closed due to earthquake damage.

Talking to a Ranger from the Park the other night and she said the geologists thought that the lava lake might become visible to all of us from the normal locations as early as March 2021.  That would be amazing and we hope it happens.  Still no running lava on the ground anywhere on the island.  Aloha. 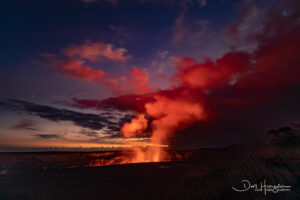