We are enjoying one of the best summers EVER.  The weather has been great.  The ocean has been calm (with one epic exception…more in a moment), warm and crystal clear.  We have had a steady stream of relatives, visitors and old friends.  Covid is still around, but those who catch it here or elsewhere seem to be having minor symptoms.  Crowds are less than normal.  The volcano continues to continue to erupt, with a something like 26 BILLION gallons of lava now in the lava lake.  No lava has shown up outside of the caldera…so it is not running on the ground nor into the ocean.  Air quality is good and skies are blue, but not crystal clear like before the eruption.  For most, the volcanic “fog” or vog has not been an issue.

Last week we had the biggest south swell that any of us can remember.  We had about four days of HUGE surf.  There were waves breaking over the roofs of two and three story condos at Keauhou.  We traveled to South Point to photograph the amazing swell at sunrise and were greeted by 30 foot faces on the windblown waves.  The swell shut down many beaches and did a bit of damage.  And then…it went completely away.  It had been caused by a hurricane that passed well south of the islands, but that storm produced waves the size of the biggest winter waves we’ve had here.

The Milky Way photography has been some of the best ever and should remain that way until September or early October.

Could not resist putting one of my bird shots on this blog. That cute little guy is just feet away from me in my office and enjoying a summer sunset.  He is a java sparrow.  The wave shots are from South Point, Hawaii…southern most part of the USA.

Our gallery is open seven days a week from 10AM to 8PM.  Life is good. 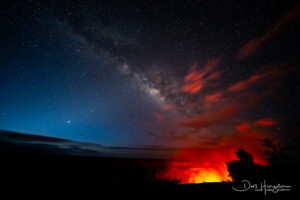 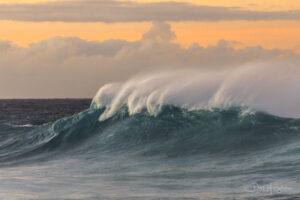 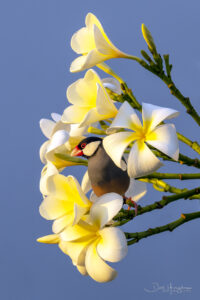