CJ and I love to do wave photography. People who come into our galleries usually appreciate the photos we get…but are often confused as to what they are seeing and how we got them. So…here is an “explainer” for those who are interested.

There are several great ways to photograph waves…from the ocean shooting down the tube of the wave, under the wave, behind the breaking wave, above the wave using a drone, from the shore using a telephoto lens or a wide lens…depending on where you are shooting…and from a boat or jet ski. We’ve done them all. Our favorite…from the impact zone where the wave is breaking shooting right down the middle of the tunnel of the wave.

Quick explanation of “tube/tunnel or barrel” of the wave…a wave comes in from the deep ocean in pretty much a straight line. When the energy of that waves starts to feel the bottom of the ocean (sand or coral)…it slows, 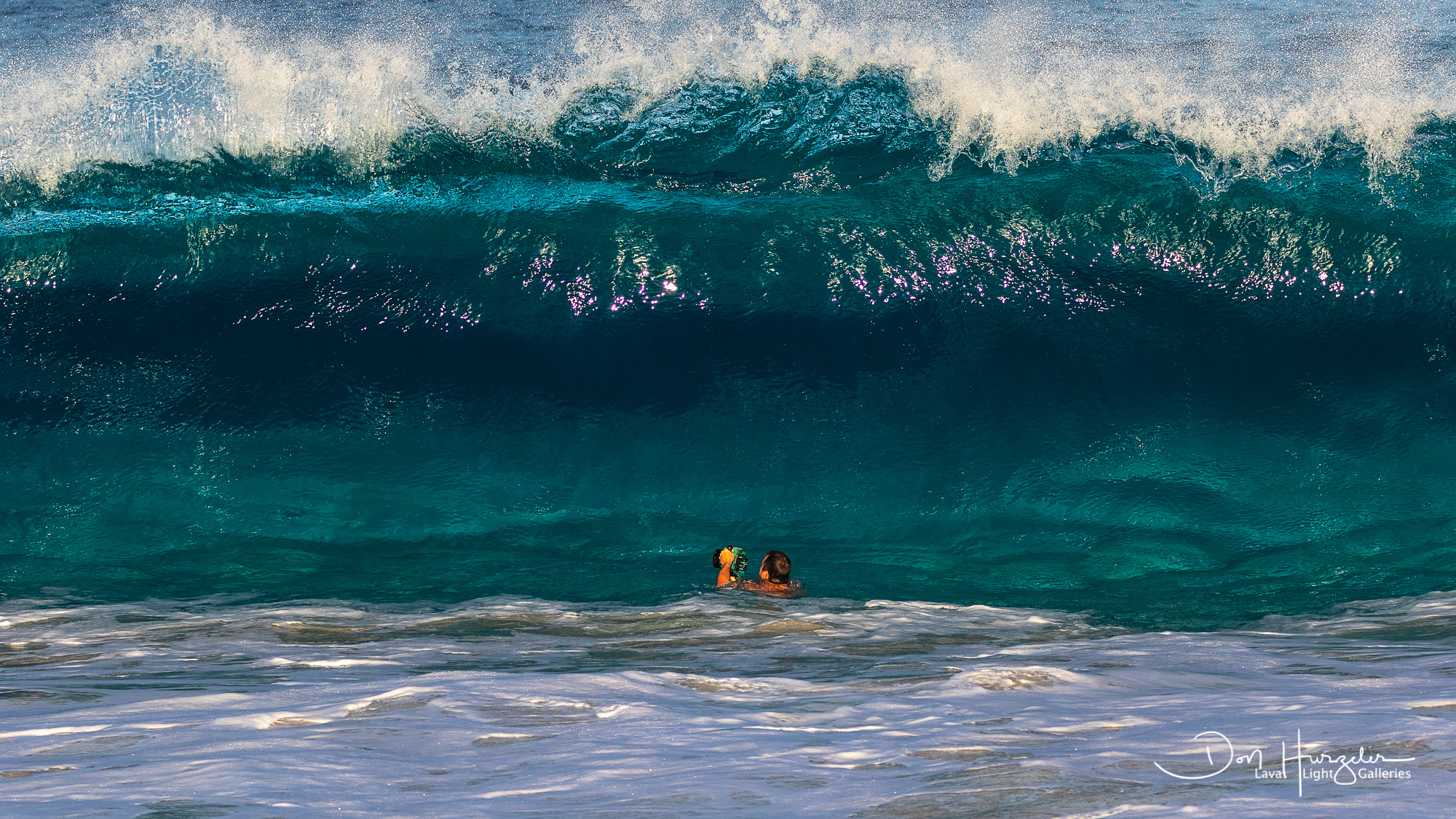 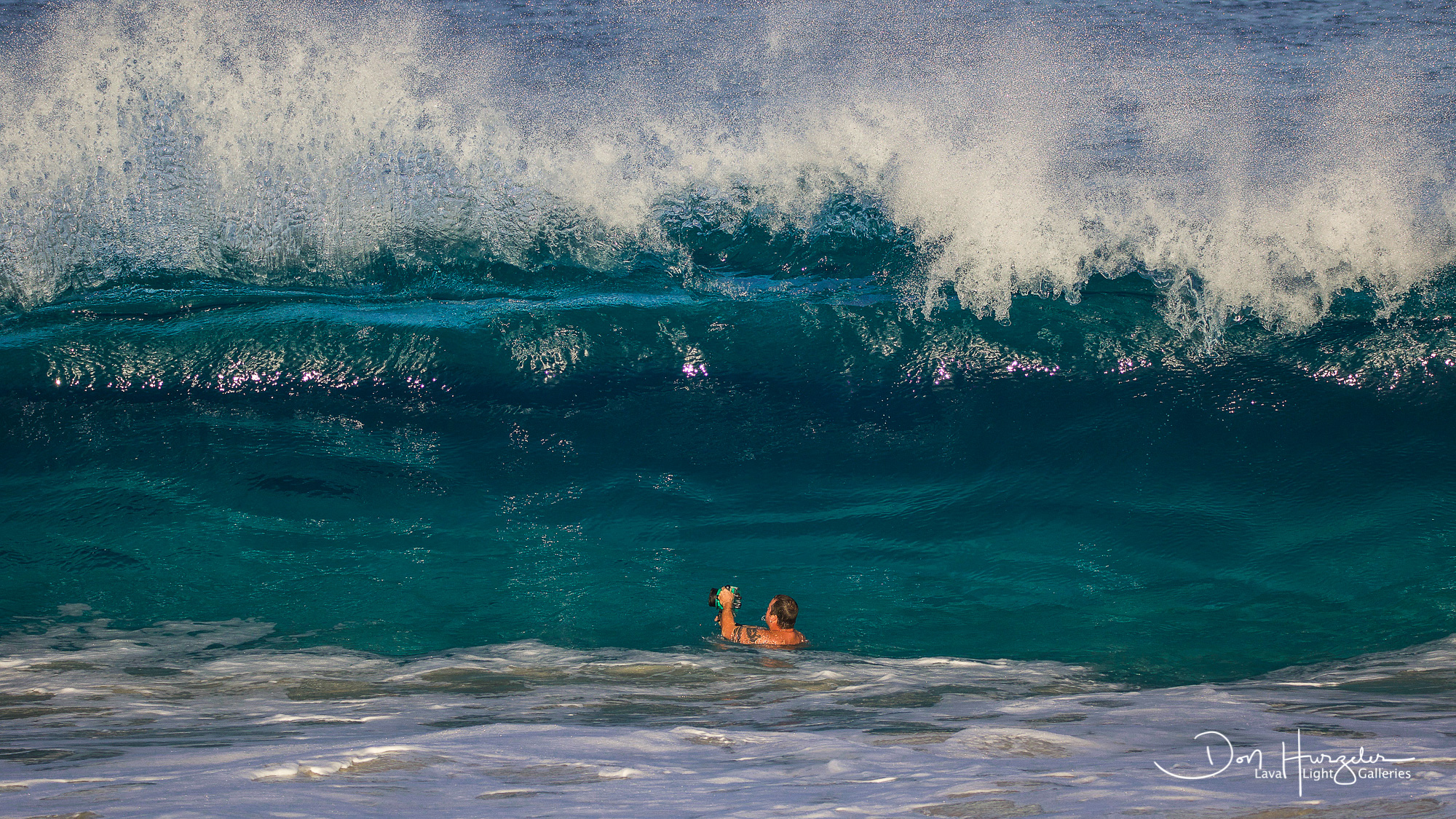 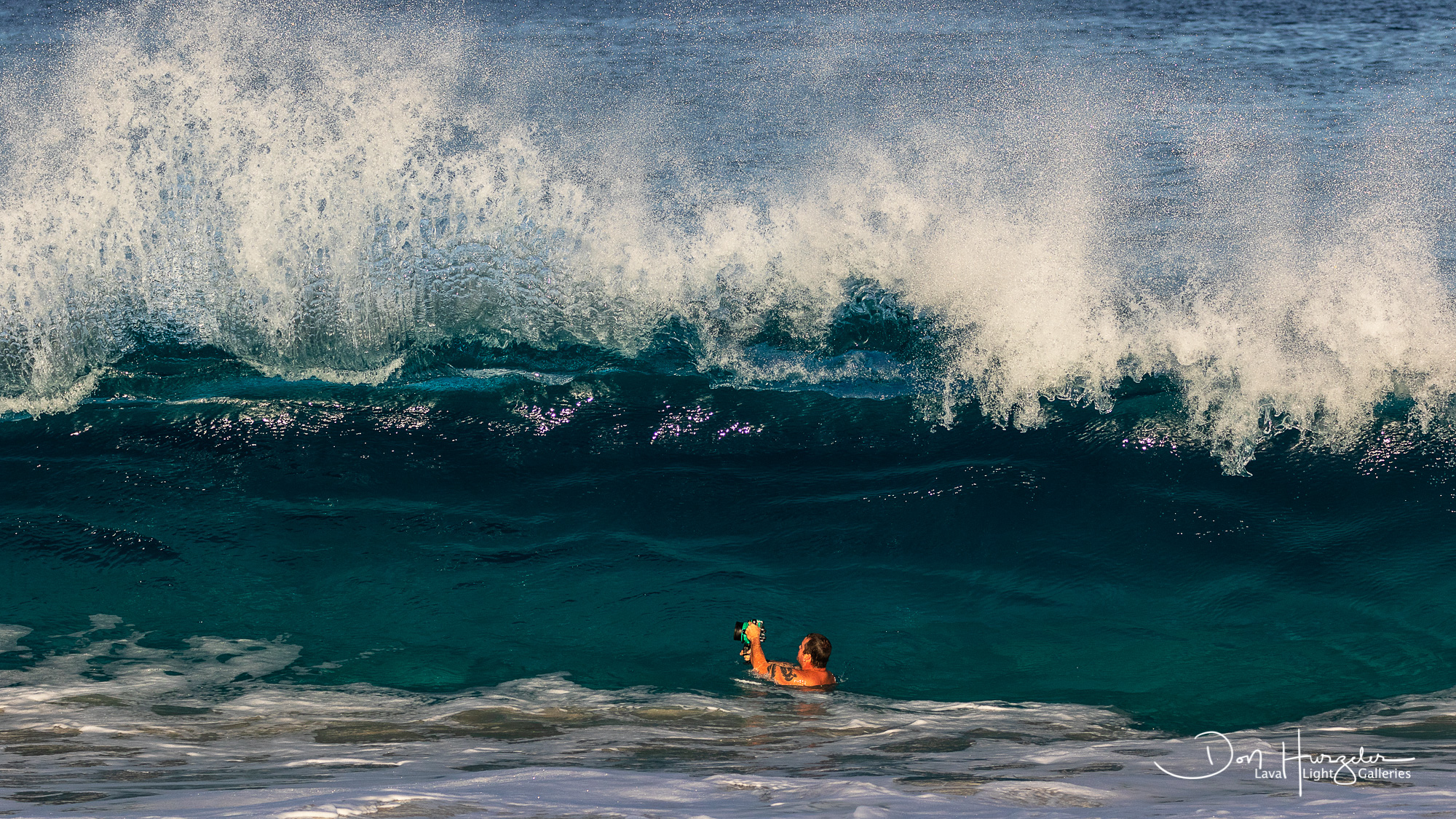 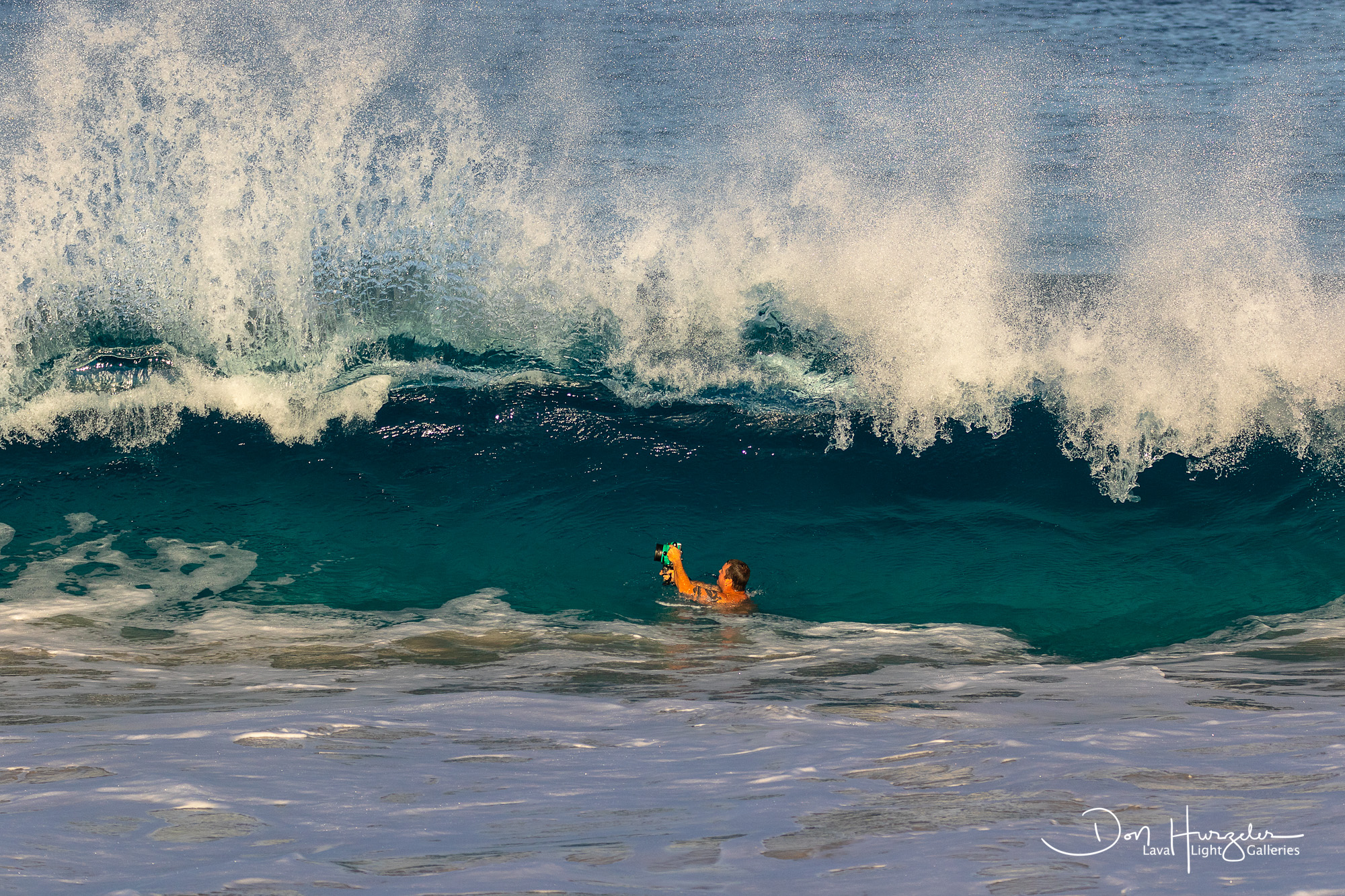 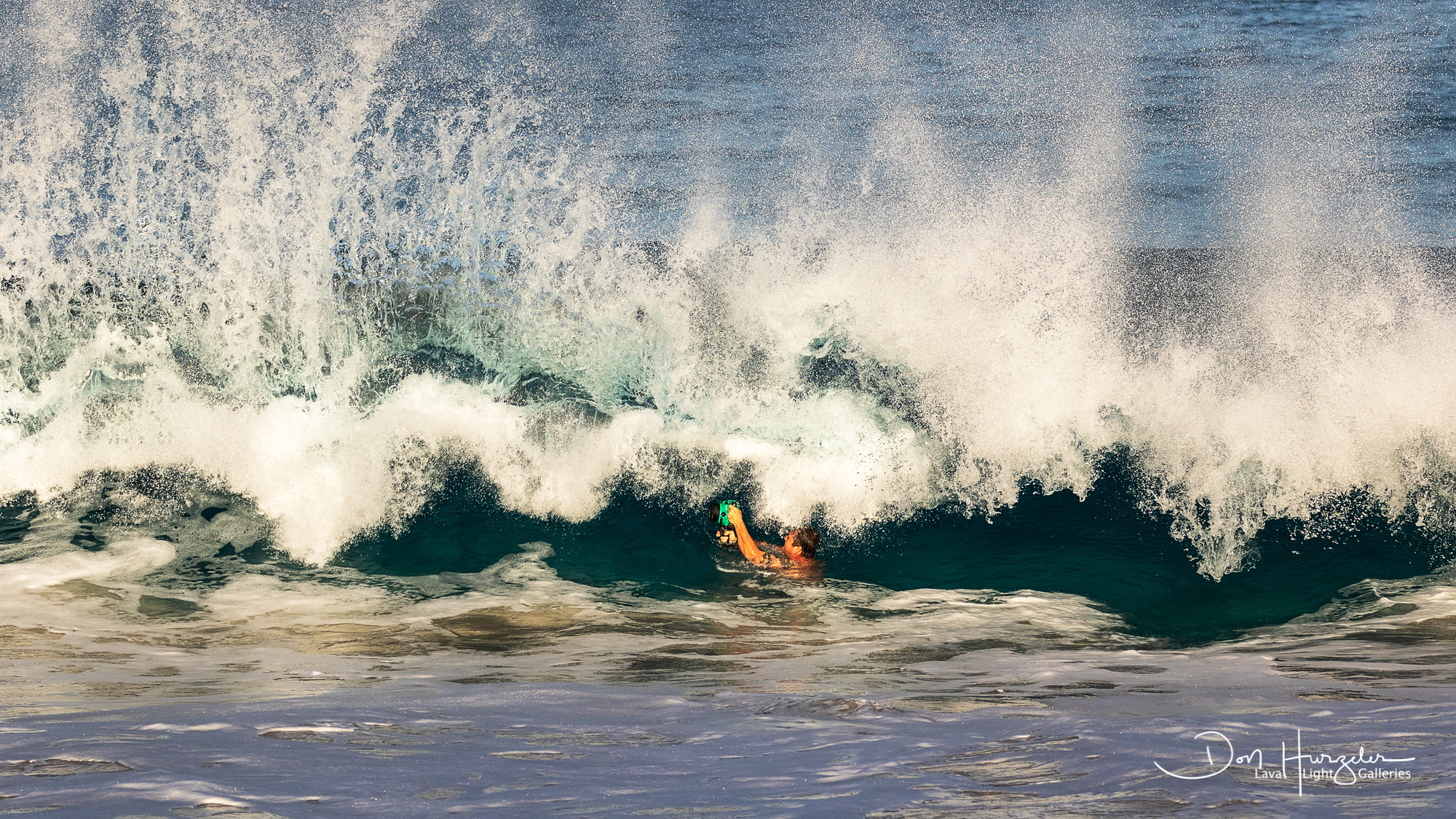 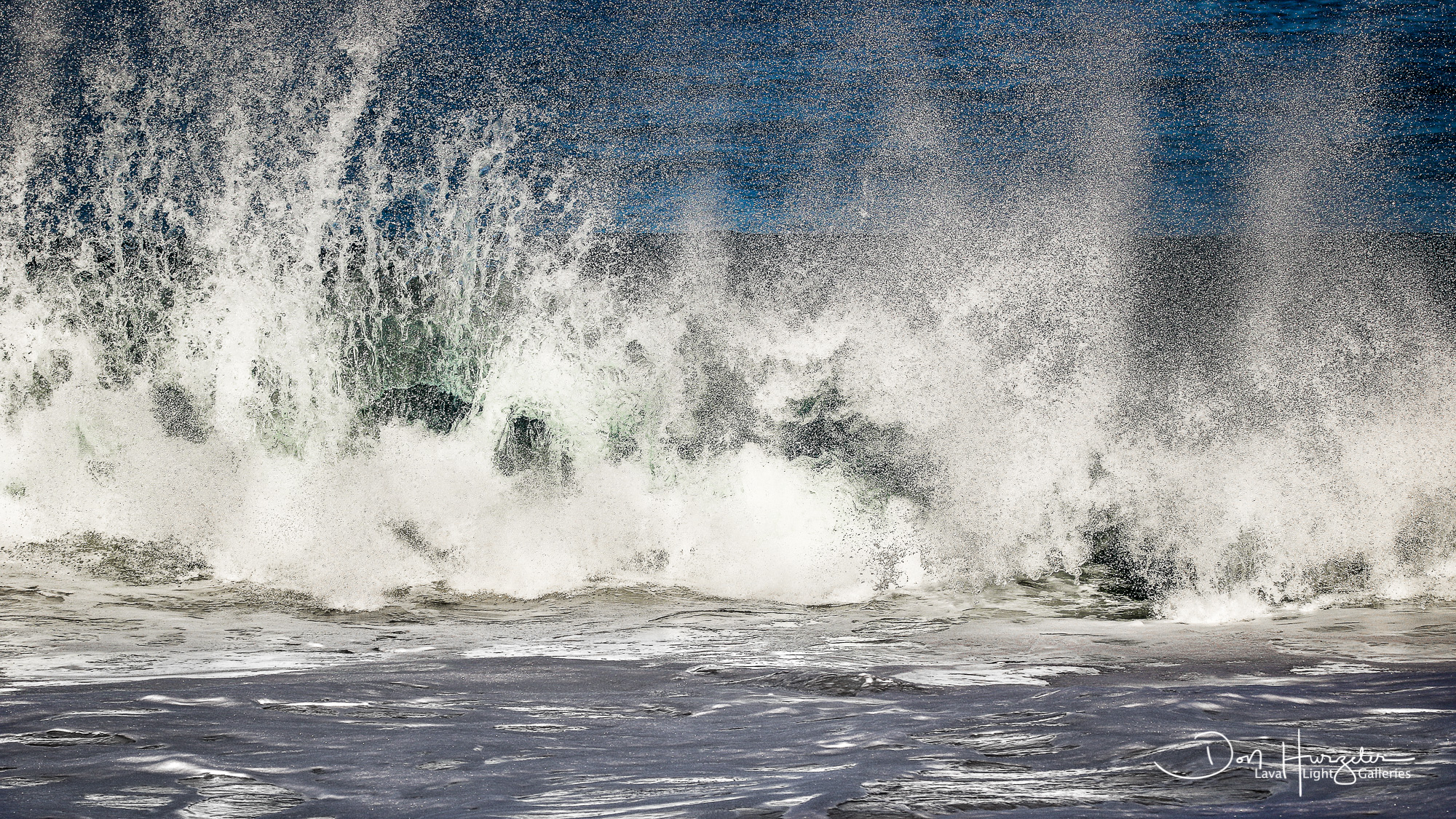 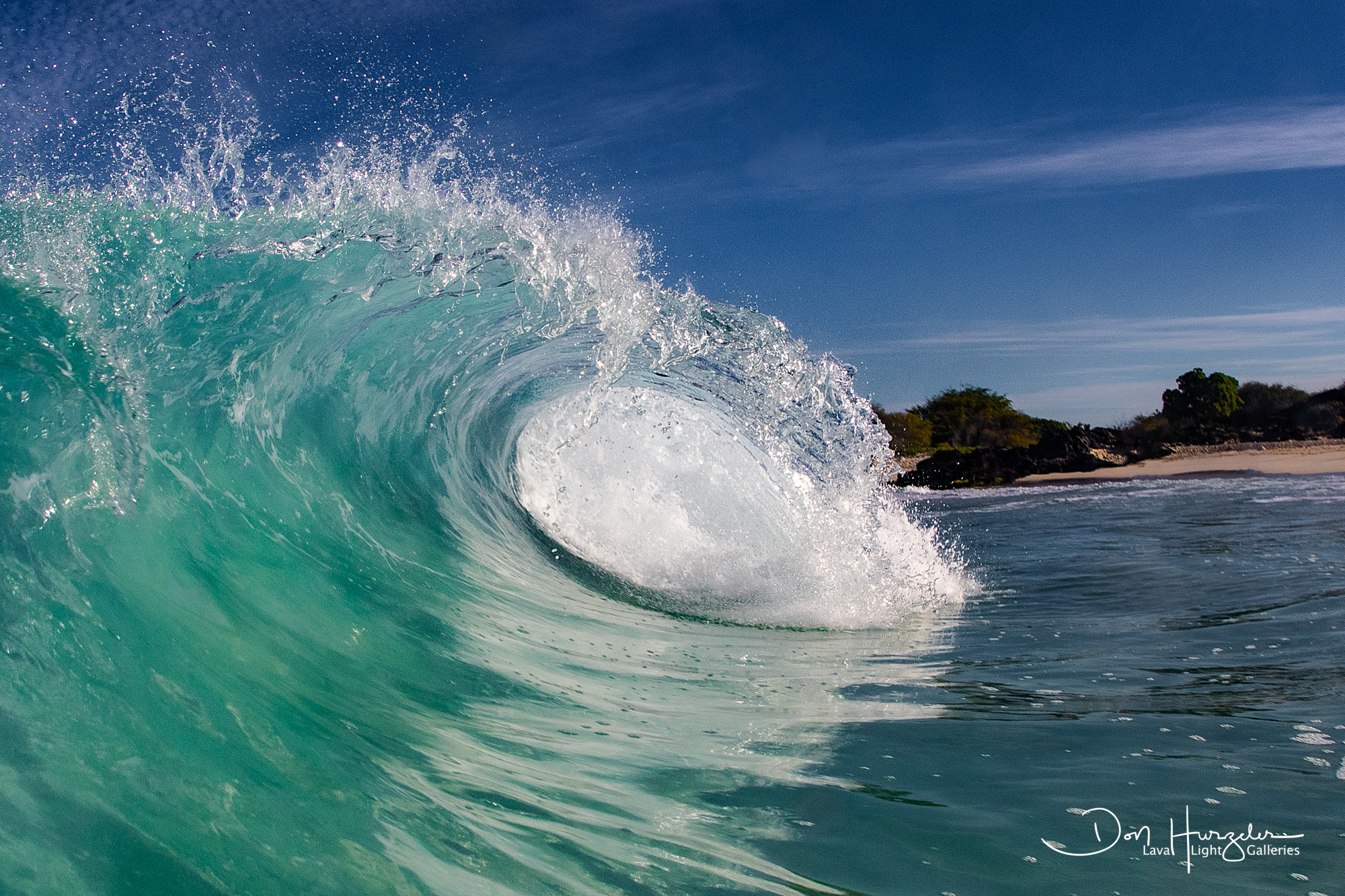 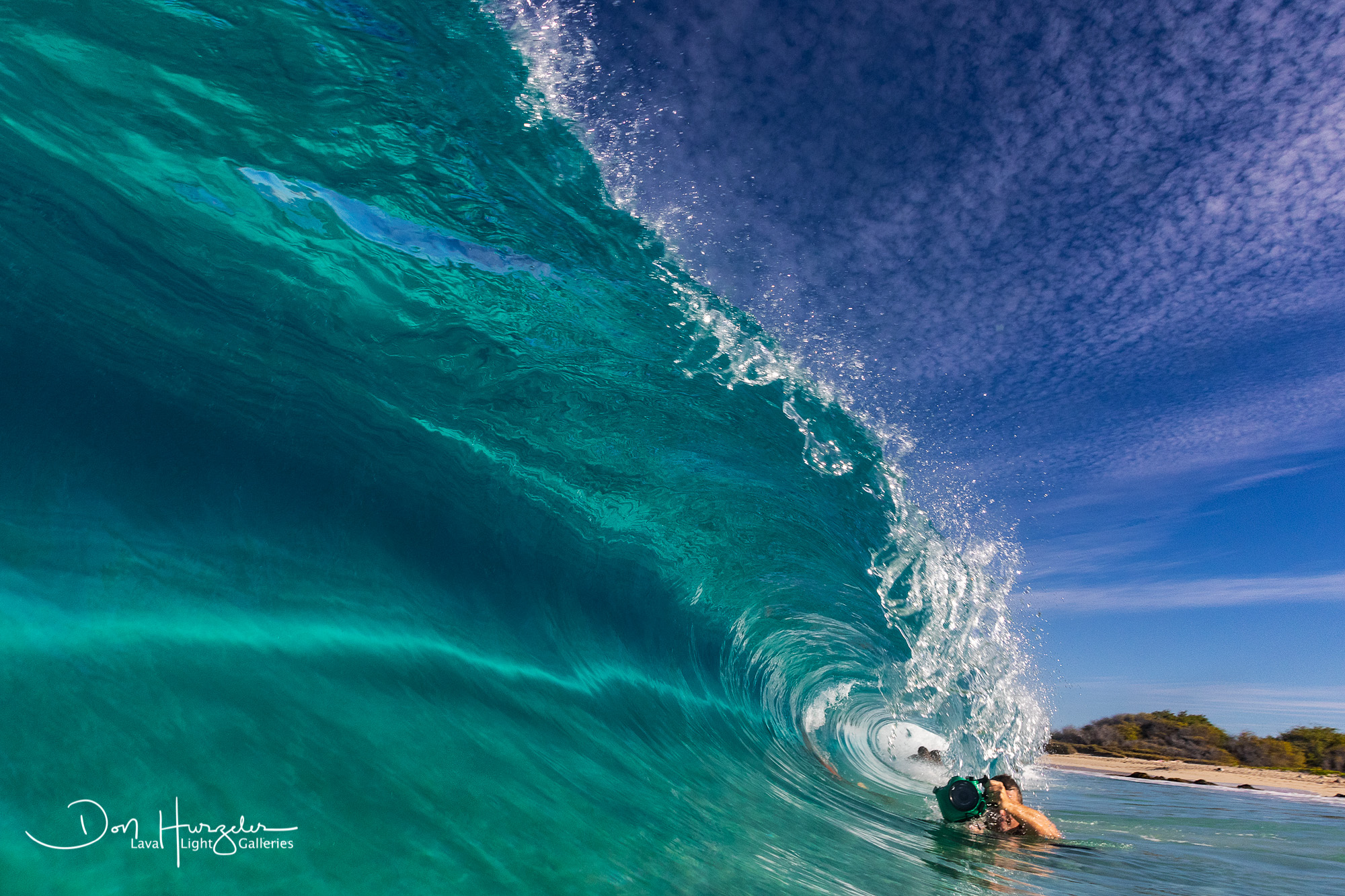 So here is how it works…we use a full size DSLR camera with a wide lens (like a 15mm fisheye or a 20mm wide lens). That camera and lens is secured in a water proof water housing that has a trigger mechanism for taking the photos. The front end of the housing has a port or dome that allows the lens to have an unobstructed and undistorted view of the scene to be shot. The housing…which together with the camera and lens might be worth about $7000…is on a leash that attaches to our arm…a blessing if the camera gets loose from our hands…except that it can also act as a weapon bringing that housing back at our head in the chaos underwater. Head injuries are fairly typical things for those of us who do wave photography. We try to shoot at 1/1600th of a second or faster at fairly low ISO and with cameras that shoot between 3 to 20 frames per second…most of our shots are with cameras shooting 8-10 frames per second.

So, with camera housing in hand, we swim or walk out to where the waves are breaking and get ready for the action. If it is shallow enough to stand…that is good and bad. Good in that you are not getting worn out swimming with one arm for hours on end. Bad in that waves breaking in shallow water can bounce us off the bottom and ruin our day.

Here comes the tricky part…timing is everything in wave photography. The current may be pulling us in/out or sideways. There may be backwash coming at us from the beach that might surprise us at just the wrong time. The wave itself might break exactly where the last one broke or ten feet further out or in. We have to pay attention to the surfers/bellyboarders/body surfers and assorted swimmers in the area around us…no fun ending up with a surfboard embedded in your forehead. Lastly, big waves suck out the water in front of them as they roll toward the beach. So, we may be swimming one moment and unconcerned about how we might get under the approaching wave…and then the water sucks out and leaves us standing in maybe six inches of water with a ten foot wave looming right in front of us. The technical term used when that happens is “Oh shit!”

If all goes well, the wave approaches with a great big barrel forming as it breaks, we hold our ground and fire our cameras down the barrel of the wave and then simply duck under it or dive through the face of the wave in hopes it will pass over us. Most times it is like a ballet and it all works out well. When it does not work out well, people get very seriously hurt. One of my good friends from London got his back so smashed so he needed surgery. A buddy of mine broke his shoulder today while we were out there. CJ and I have both had hospital visits over the years…broken bones or wounds in need of stitches. My dentist has made a good living on the damage done to my teeth when I was unable to get out of the way of a loose surfboard. Oh..and we love to do much of our photography as the sun is coming up…a favorite time for sharks to come check you out…and we have had our issues with those guys from time to time.

Reading back through this, I make it sound like anyone would have to be nuts to do wave photography. We are. We are also amazingly happy doing it…it is about as much fun as you can have with very few of your clothes on. In another blog I will show you photos from behind the waves, below them and in front of them as they roll toward the photographer. I think you will love them…and I will do an “explainer” as to what you are looking at and how the features in the waves form. In this one, I will show you a sequence of CJ standing his ground to get his shot on a sizable wave from today and a shot or two of mine from today shooting right down the barrel. Any questions…just ask. And there is a good selection of wave photos here on the website in a gallery that we have cleverly named “Waves”. Aloha.