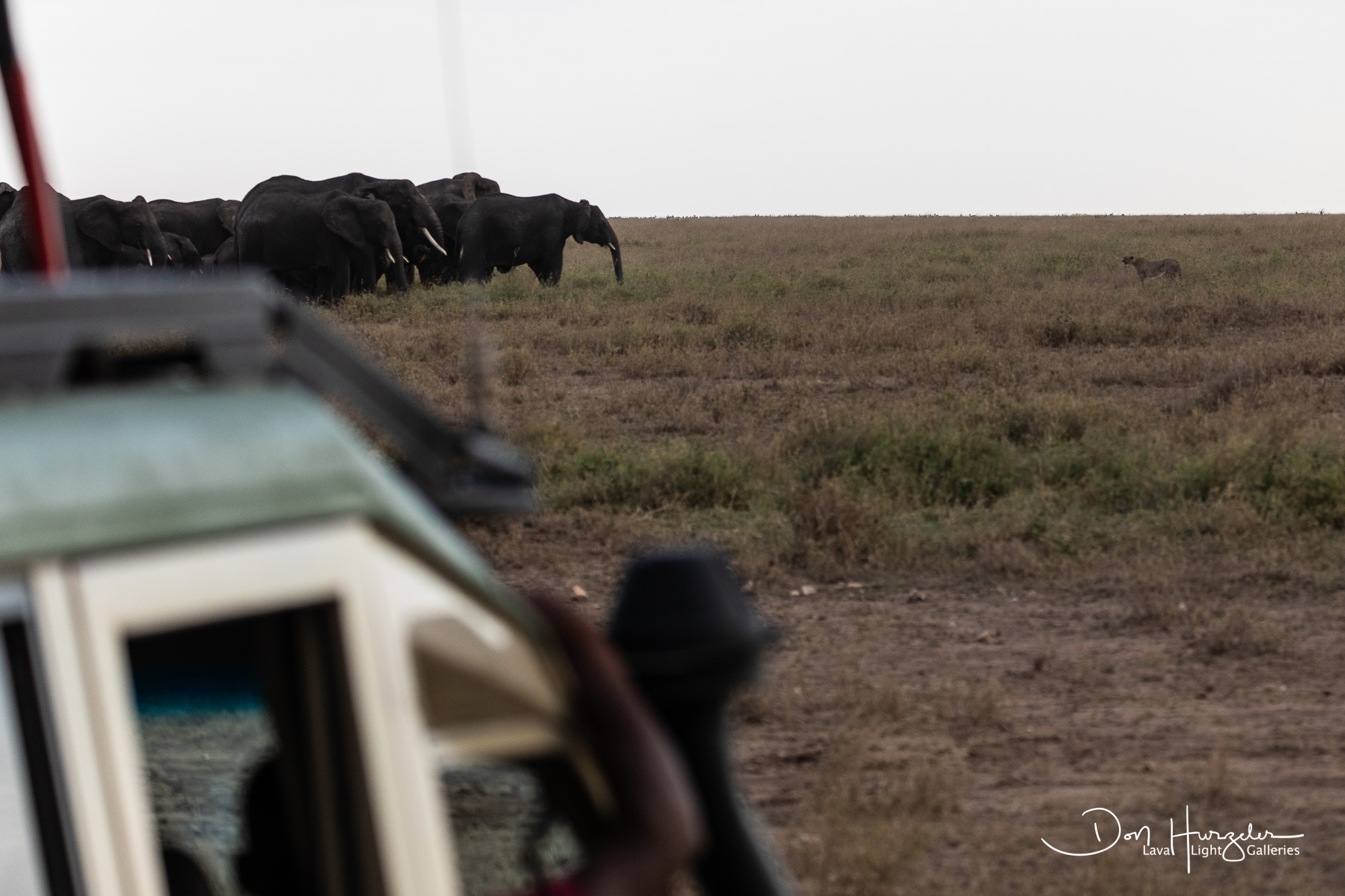 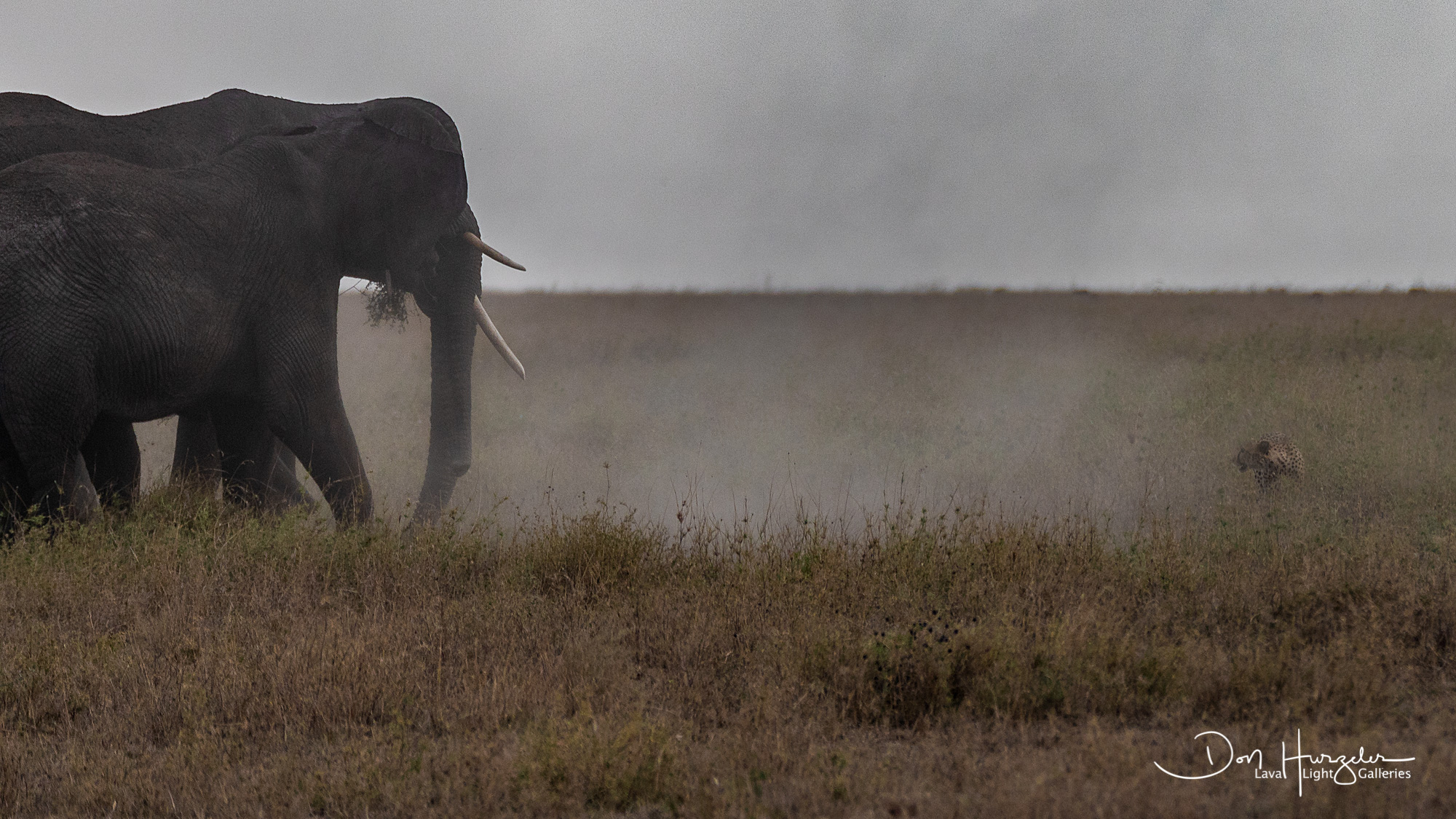 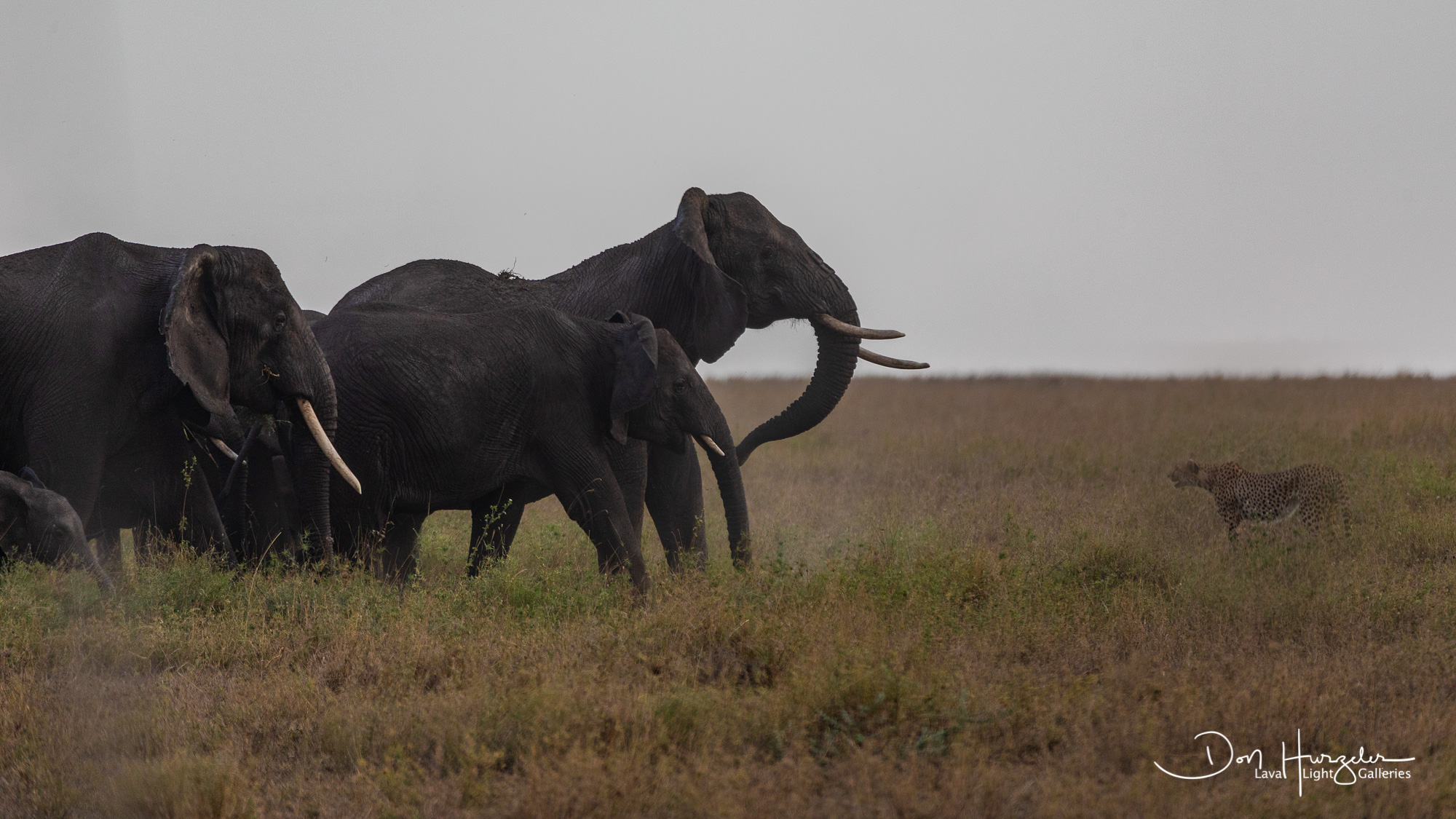 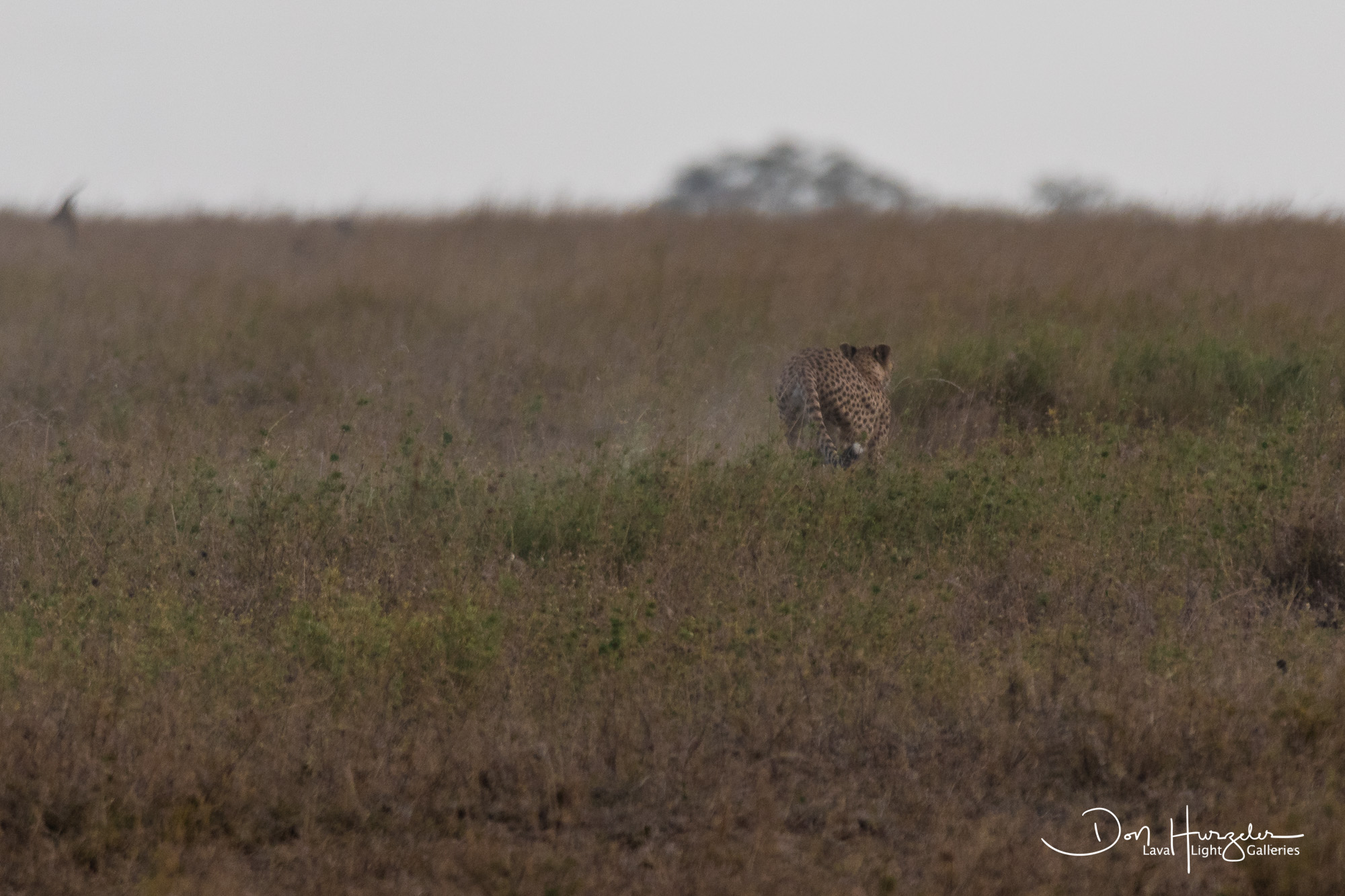 Linda and I rolled up on an astonishing scene in the Serengeti. Unfortunately, we were not the only ones who rolled up on it…several other safari vehicles beat us there. Our view of the event was from well off to the right and our cameras had to point directly into a pure white/gray sky. Not exactly perfect for picture making…but amazing to watch.

A cheetah we had photographed earlier went on a hunt. We watched the cheetah glide through the tall grass in search of a meal. When a meal was found, the cheetah took after it at full speed and appeared to have gotten its prey. By then, we were a long ways off and had to reposition the vehicle to get a view of cheetah and whatever it had caught. This caused us to circle around over quite a distance…took us several minutes. When we did get back in decent position, several other safari vehicles had beaten us to the site and kept us from getting close. I cranked out the 600 mm lens and started shooting.

The cheetah did indeed have a kill. The grass was high and I could clearly see the cheetah but not the kill. However, to the left was an entire family of elephants…big bull elephant in the lead, some moms and a few kids…maybe 10-15 huge animals in all. The elephants were on a direct path that would take them over the cheetah and the kill. The cheetah would have none of it. He/she stood up tall and refused to move. The elephants saw this as a threat and began to stomp the ground, throw around their trucks and trumpet warnings to the cheetah. The stand off lasted a few minutes…this small (by comparison) cheetah and this giant force of pissed off elephants. Lots of dust in the air…lots of sound. Finally, the lead bull elephant seemed to raise up on his back legs (I think…could not see it clearly), came down to stomp the ground and trumpeted loudly. At that, the cheetah turned and walked away. The lead elephant chased him and the cheetah started running. The elephant stopped within maybe 50 yards and the cheetah turned around to see that the chase was over and things could return to normal.

Did the cheetah return to the kill? Don’t know…but I assume it did. Here is what I do know…I know that cheetahs are one brave species…they will not give up their kill willingly and will stand their ground til almost the last moment. Reminded me of my spear fishing friends here on the Big Island. I’ve seen them spear a fish…have a shark come up like a lightning bolt to take that fish away…and my brave friends WILL NOT give up that fish. They fight the shark for it and I head directly for the boat and get the heck out of the way. Cheetahs are the spear fishermen of the Serengeti.

A word about the following photos…they are the worst quality photos I have ever posted. With the white/gray background, our angle and the distance involved…these were never going to be any good. However, they do document an event that Linda and I want to always remember, so I am posting them here. They are all exactly as shot…very little editing because…why waste the time…they are crappy shots. All have been cropped to bring the subject closer and eliminate as much of that horrible sky as possible. The third one in the series…the cheetah right in the face of the elephants IS ALTERED by me and I want to make that clear. The photo before it shows the accurate distance between cheetah and elephants. In the next photo the cheetah was a bit closer…but only a bit. I cut out some (maybe ten feet…kind of hard to measure) of the middle ground to give a clearer view of the shot. We do not do that in any of the shots we sell…they are what they are…but I have no hopes of every selling this photos so I wanted it to at least show the scene in a bit more detail. Not trying to deceive anyone.

Lots of brave animals in the Serengeti. I love that they stand up for themselves and take on big challenges. I also love that they have the good sense to eventually retreat if absolutely necessary. Neither Linda nor I wanted to see a cheetah stomped to death by an elephant that morning and happy it turned out as it did.